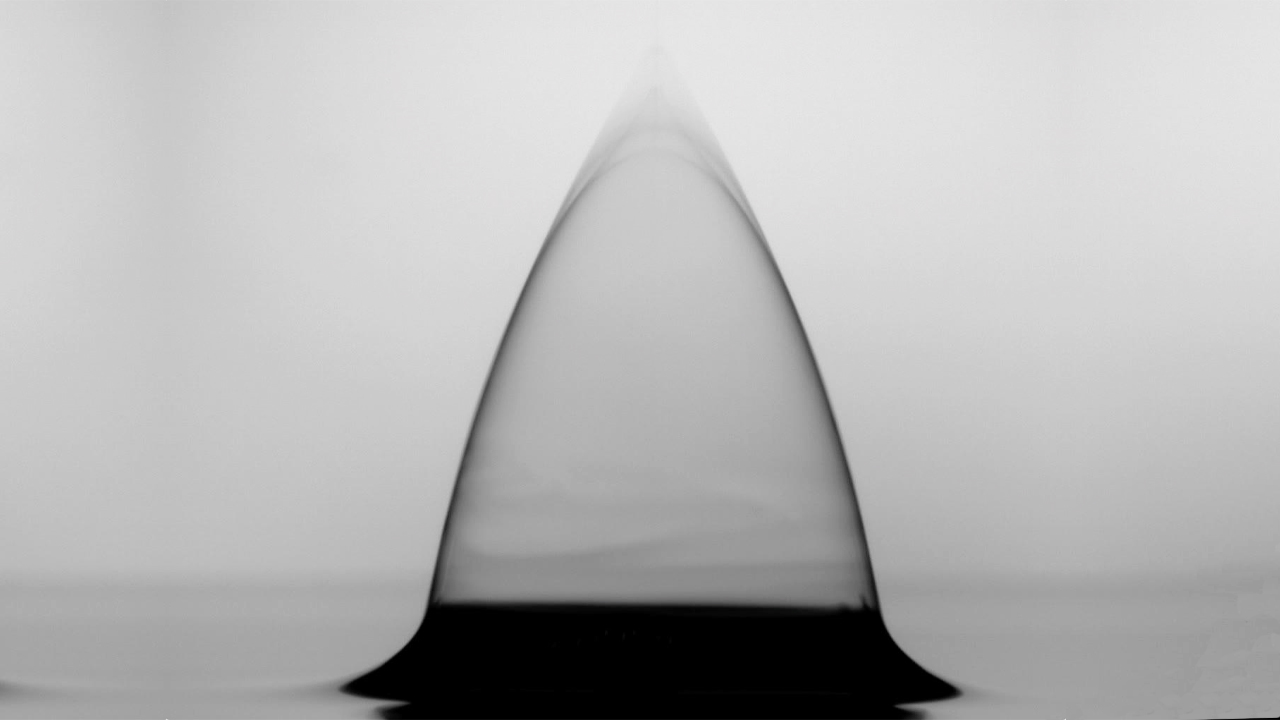 What influences can a dry or liquid substrate have on the dynamics and shape of a bubble immersed in an electric field? This is a question that researchers at the GRASP Lab, the ULiège Research and Applications Group in Statistical Physics have been looking into. The results, which provide a better understanding of the dynamics of bubbles and their meniscus under electric fields, have just been published in Physical Review Fluids.

ubbles are fascinating objects, which, due to their natural iridescence and atypical properties, capture the interest of artists and scientists alike. One of the most remarkable abilities of the bubble is that, once blown, it spontaneously adopts the shape of a perfect sphere. This property is linked to its very particular structure, which brings into play two very different length scales. Indeed, a bubble is a centimetric object  composed of a thin soapy membrane whose thickness generally does not exceed one micrometer. It is thanks to this very thin liquid membrane, which separates the encapsulated air from the outside one, that we can observe superb colors on a spherical bubble floating in the wind.

It is the presence of this membrane, and therefore of two air-liquid interfaces that distinguishes bubbles from drops. The latter have only one interface, which means that the volume of a drop is entirely composed of liquid and is, therefore, "heavier" than that of a bubble. As a result, drops are more sensitive to gravity, which deform them much more than bubbles.

However, it is possible to modify the shape of a bubble in other ways, for example by using electric fields," explains Sébastien Mawet, a PhD student at GRASP (CESAM Research unit/Faculty of Science) at ULiège and first author of the article published in Physical Review Fluids. Indeed, once dropped on a substrate to facilitate its study and submitted to an electric field, the initially hemispherical bubble deforms into a half-ellipse and adopts the shape of half a rugby ball. If we continue to increase the field until we reach values of several kilovolts per millimetre," continues Sébastien Mawet, "the bubble changes shape once again to take on the shape of a cone. Once this state is achieved, the bubble begins to eject micrometric charged droplets from its tip at very high speed." This physical phenomenon is known as the Taylor cone, in memory of the first scientist who explained it.

This phenomenon is particularly studied in drops," explains Stéphane Dorbolo, researcher at GRASP and co-author of the study, "because it is the basis of electrospraying and electrospinning techniques, which are used in a variety of fields ranging from very high-resolution printing to space propulsion via the nanofibre weaving to make dressings that allow drugs to be dispensed very effectively directly onto a wound. "However, in each of these technologies, the drops are based on solid, not liquid, substrates. Indeed, the techniques required to study a drop on its own liquid are difficult to implement.

A bubble, however, is not subject to these restrictions. It is in fact very simple to form bubbles on the surface of a liquid," says Hervé Caps, physicist at GRASP and co-author of the study. We therefore used this particularity to study the influence of the substrate - either solid or liquid - on the dynamics and general shape of bubbles immersed in an electric field generated by a plan capacitor. "

According to the results, the researchers found that the influence of the substrate (a dry plate or a liquid pool) could be summed up in two main trends. Firstly, there is no contact line and then no "friction" between a liquid substrate and a floating bubble, which allows the base of the latter to move easily. Secondly, unlike bubbles resting on solid surfaces, floating bubbles, when placed in a liquid pool, have both an emerged and immersed part. The immersed part leads to the creation of a third air-liquid interface on top of the two other already existing due to the emerged part. It is the combination of these two effects, inherent to floating bubbles that explains the differences in shape observed between floating (on a liquid substrate) and sessile (in contact with a dry substrate) bubbles when submitted to an electric field.

The interest of this research is to study the interactions between liquid and electric field in the particular configuration of a bubble soap film. The understanding of these mechanisms is the basis for the development of electrospraying and electrospinning techniques which are a source of major technological innovations in various fields.